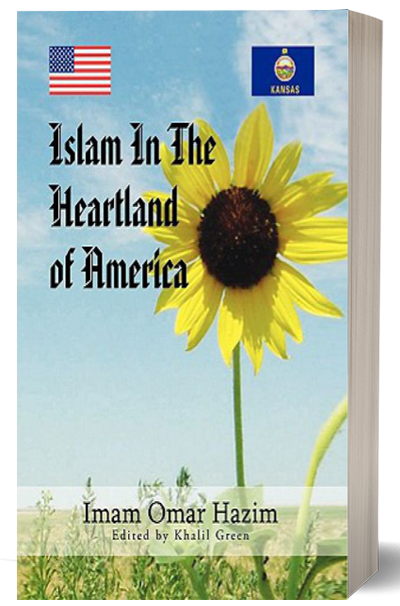 The purpose of this book is to inform and educate the general public of how Islam is taught in a mosque in the heartland of America. It includes the Friday khutbah (sermons) by Imam Omar Hazim and several other Imams (Spiritual Leaders).

William Franklin {Imam Omar Hazim}, born and raised in Kansas City, Missouri, grew up in the 1940's and 1950's , during a time when American racial oppression against its " Black " African American citizens was vigorously enforced, and African Americans, being oppressed and affected by Jim Crowism, were prohibited from living within white neighborhoods, or attending those schools, theatres, and churches. William remembers his parents warning him not to wander off to the south side of the 27th street, where predominantly White Americans lived, and where black boys could therefore be arrested and charged with trespassing. " Resentment ? Not really " said William " because that was the way of life back then."

Back then, however, William did see the ugliness of racism. At 15, he was arrested when a white policeman was killed in the city and the authorities rounded up more than a hundred black men. William, like most other detainees, was innocent and let go. At 17, while using a restroom in Mississippi, William remembers, how a man banged at the restroom door and yelled: “This restroom is for whites only. It’s not for ——-!” The blank was filled with the n-word, a word of racial contempt and hatred, commonly used to address a black manany black man. Back then, almost every black person had to endure such micro-aggressions almost every day.

Growing up in Kansas City, William would go to “their” church with his brothers and sisters. In the church everyone was black except the image of Jesus. William noted the blonde hair, blue eyes, and the white skin of Jesus, a figure he worshipped as God, but a figure that looked, said William, awfully similar to slave owners who forcibly abducted men, women and children from Africa, shipped them to America, depriving the imported cargo of its cultural and religious heritage, denuding the newcomers of their language, personal histories, even African names. A gradual realisation that American Christianity has been tainted with racism sowed the seeds of William’s transformation.

At 18, William dropped his last name, Franklin, an English name that, he thought, represented not him but some past white master. Discarding such last names was common when men joined the Nation of Islam. This black organisation was launched by a mysterious foreigner, called Fard Muhammad. After espousing that black is divine, and leaving the Nation in the hands of Elijah Muhammad, Fard disappeared. The Nation began to believe that Fard was God. As a ritual of worship, Fard’s picture was hung in every member’s house, including William’s.

The Nation gave William a new way of thinking. William now started to believe, as did most members of the Nation, that blacks were noble and divine, whereas whites were wicked and evil. Fard had turned American racism on its head. For the next fifteen years, William donned black suits and bow ties, led the Nation in various ministerial capacities, and later met Elijah on a monthly basis. Black pride liberated William’s mind and freed his soul. Lurking behind this uplifting experience, however, was a disturbing irony. Fard, the Nation’s God, was not a black man. Fard’s white complexion most apparent in the picture hung in William’s house belied the belief that white is evil. The change was therefore inevitable.

In 1975, under the leadership of Warith Deen Muhammad, the Nation began to move towards traditional Islam. So did William. He first changed his name to Omar Hazim. A couple of years later, Omar went to Hajj and for the first time in his life saw a sea of Muslims of all colours, races, and ethnicities. Black eyes glimpsed divinity in brown and blue eyes. And blue eyes were lowered with as much humility as were brown and black eyes. And at the conclusion of Hajj, all men shaved their heads whether the color of their hair was black or blond. Through this experience of universal brotherhood, Omar could no longer accept that any race is inferior or superior.

On embracing traditional Islam, Omar removed Fard’s picture from the wall. God is not man, nor is He black or white. “There is nothing that resembles God.” This powerful message of the Quran transformed Omar’s mind and soul, which had been marred twice by racism, first white then black. Discarding all race-based views of God and religion, Omar now devoted himself to learning more about Islam.

But his learning of Islam was not abstract. Omar has been a professional mason all his life. He first built Nation’s temples. Omar now employs his masonry skills to construct mosques. He built a mosque in Kansas City, the Inshirah masjid, not far from the South side of 27th street. He has also built the Islamic Center of Topeka where he is now the Imam.

Imam Omar Hazim’s khutbas often emphasize the Islamic ethic of patience and tolerance. Prophet Muhammad (PBUH) faced all forms of adversity, false accusations, and threats to his life. But during this ordeal, the Imam reminds the audience, Prophet remained an inexhaustible source of tolerance, patience, and kindness. Imam Hazim’s own life experiences, now spanned over sixty one years, has taught him the wisdom of staying the course with patience while life reveals its mysteries. And as a Muslim, he firmly believes that God is with those who practice perseverance and patience (Quran 2:153).

Unfortunately, says Imam Hazim, Muslim countries fail to practice patience and tolerance. In Pakistan, he points out, the bloody feud between Shias and Sunnis is mind boggling. In Afghanistan, Iraq, Bangladesh, and Sudan, Muslims are killing Muslims. The subjugation of women, including honour killings, has no place under the liberating principles of the Quran and the Sunna. These and other stories, even when exaggerated in the Western press, undermine Islam’s teachings of compassionate equality, human dignity, and authentic tolerance.

True to his words, Imam Omar Hazim leads the Islamic Center of Topeka with an open and generous heart. Over the years, many Americans have accepted Islam at the mosque. Even newborns, including my own two sons, listen to the Imam as he chants the first adhan in their ears. In a spirit of mutual respect, American Jews, Christians, Hindus, Buddhists, all are invited to attend khutbas, prayers, and iftar dinners during the Ramadhan. Reciting suras of the Quran with accruing facility, the suras that tell the stories of Ibrahim, Moses, and Jesus, the suras that recognize the dignity of all colours and languages, and the suras that forbid compulsion in religionImam Omar Hazim leads prayers attended by blacks and whites, men and women, Arabs and non-Arabs, Sunnis and Shias. Dr. Khan is a professor of law at Washburn University in Topeka, Kansas. ​

The Religion of Islam

The Opening Chapter of the Holy Qur'an

“In the name of Allah, Most gracious, Most Merciful. Praise be to Allah, the Cherisher and Sustainer of the worlds;

Most Gracious, Most Merciful;

Master of the Day of Judgment.

Thee do we worship, and Thine aid we seek. Show us the straightway,

The way of those on whom Thou hast bestowed Thy Grace, those whose (portion is not wrath, and  who go not astray.”

25 Most Frequently Asked Question About Islam